Banteay Srei in Siem Reap,Cambodia is a  unique temple. It is perhaps the only one not built by a king. It was built in the 10th century by a Rajguru, Yajnavaraha. It is called the jewel of Khmer architecture and represents a true blend of Khmer and India culture. Several stories from Indian epics are carved in the pink sandstone lintels and pediments of this small but exquisite temple, situated a little away from the Angkor Thom complex.Banteay Srei stands for 'citadel of women'.
The Eastern pediment in the  Southern library has the carving of Ravana shaking Mount Kailash the abode of Lord Shiva. 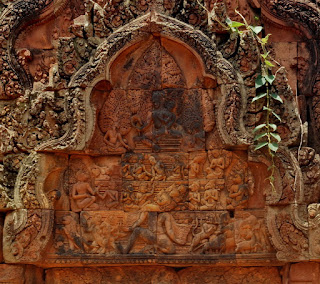 One of my earlier posts on Pattadakkal is reproduced below:
Ravana shaking Mount Kailash

After severe penances and conquests, Ravana became very strong and arrogant. He went to Himalaya, defeated his half-brother, Kubera and usurped his Pushpaka Vimana . On his return, he was overflying Mt. Kailash. Nandi advised Ravana to circumambulate Kailash so as not to disturb Shiva and Parvati.
The arrogant Ravana said, “Who is Shiva?” and tried to shake the mountain. Though Parvati and her entourage were frightened, Shiva nonchalantly pinned down Ravana with his toes. Ravana wailed for mercy. Having humbled Ravana, Shiva released him. After this experience, Ravana became a great devotee of Shiva.
In another version, it is believed that Ravana’s mother, Kaikasi, herself a great devotee of Shiva, wanted to go to Mt.Kailash. Arrogant Ravan said that he could bring Kailash to her and attempted to lift it and transfix it in Lanka.
Epilogue: Ravana after becoming a devotee of Lord Shiva sang in His praise. Since he had no musical instruments to accompany his singing, some believe, he cut off one of his heads and an arm to make a stringed instrument with his thigh nerves. This is also believed to be the origin of musical instruments. In fact, an instrument called Ravanahatta (Ravan’s hand) is still in use in some parts of Rajasthan.
Other sculptures: the other famous figure of Ravana and Mt. Kailash is in Ellora (Cave 16)
More pictures at: http://www.flickr.com/photos/shutterbug_iyer/
and
http://community.webshots.com/user/harisub

Posted by Shutterbug Iyer at 9:53 AM 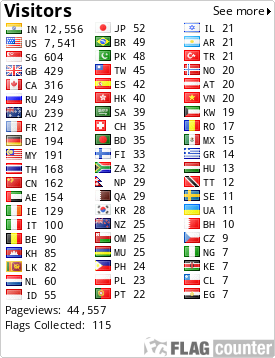